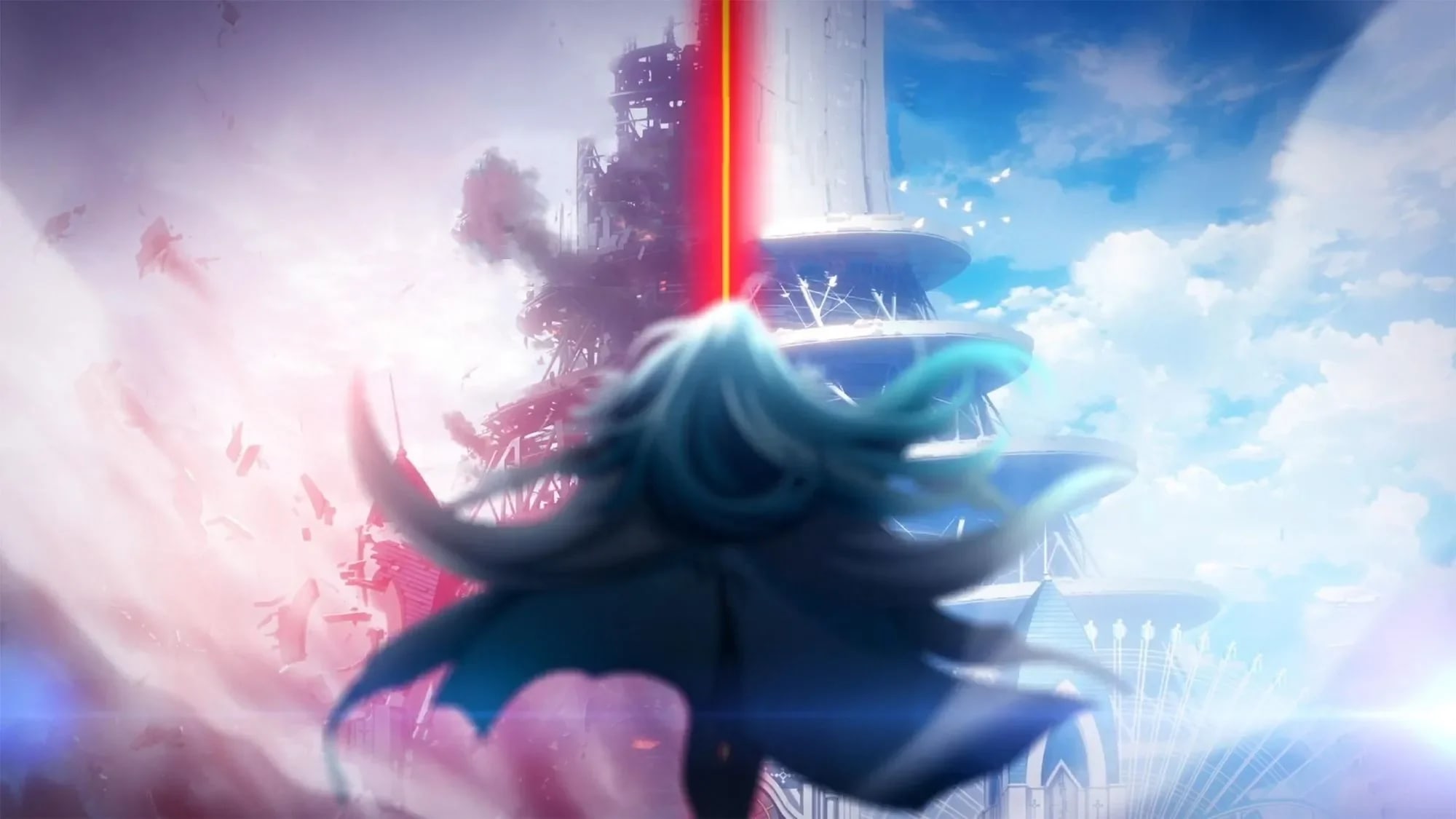 For some time, I have been pondering about the main drive that made me keep grinding anime after anime despite a large chain of disappointment in the past.

But what do I know? Out of the blue, this anime, Vivy Fluorite Eye's Song introduced itself and incoherently reminds me that, even though anime itself carries a variety of distinct drawbacks, it is also the one medium packed with unlimited potentials to become something much more than a mere piece of entertainment.

The plot of VF is not something too groundbreaking, I'd say, but the selling point lies in the way it is catered to detail.

It has coherent plotlines loaded with twist after twist and exciting revelations followed by emotional and dramatic outcomes.

To be more specific, this series doesn't rely on a formulaic approach and has succeeded in subverting expectations in a good way.

Apart from that, while it contains some predictable events, the execution never went astray to deliver the highest quality possible of a momentary outburst. Hence, even if you already know what will happen, you can still expect to get pumped up by the brilliant resolution they came up with.

Furthermore, no matter how big an event or incident has been laid out/focused on, they all serve a purpose, have a meaning, and even get a callback later on in the story, which is pretty commendable from a writing standpoint.

And to put the cherry on top, Vivy Fluorites would often feature thought-provoking themes regarding the meaning of being "alive" and such, which can get very cathartic.

If there's anything to complain about, well, it's funny because Vivy Fluorite's advantage also contributes to its own shortcoming.

Given how grandiose the AI subject can get, oft time the flow of the story might get somewhat convoluted and feels awfully convenient, especially when it comes to the character's resolve in general.

On top of that, having a fast-paced story is not always a good thing. While it ensures substantial plot progression and shaping up world-building, sometimes the expositions appear to be hastily assembled or rushed in the middle of the heat, which ruins the atmosphere.

That said, these are not really significant issues as the anime knows how to ride on its momentum and world-building to make up for this predicament, so nicely done, I'd add.

Speaking of world-building, this is a big plus in my book. The A.I/cyberpunk-ish theme is not new nowadays, but the tradeoff is a transparent system and striking venue designs that constantly got me hyped and in awe of those "scenery."

I'd dare say it gives off a strong fantasy vibe despite being 90% cyberpunk-ish. Simply put, an ambitious setup that totally has what it takes to back up the stake and sure as well delivered.

On a different note, whether it was intentional or not, I constantly ran into references from other media such as Ergo Proxy, Perfect Blue, Baldr Sky, Heaven's Feel, Dies Irae, Kikokugai, Oblivion, Tron Legacy, Blade Runner 2049, Matrix. So, man, I must say that I'm delighted to have run into this anime because rarely have I been treated this much.

Moving on to the cast of Vivy Fluorite, I must give them that they are really well crafted from design, voice acting, and development throughout the show.

Whether they are assigned a minor role or play a crucial part to the plot, there's always room for each of them to shine.

Vivy is the protagonist that underwent a considerable amount of character "shift." At some point, it is physically (well, somewhat), some other time, mentally (again, not literally but whatever).

As mentioned above, while there exist some shenanigans or simply AI "hack" with the humanization thingy, the end result is that with every action that Vivy takes, it always comes with consequences, be it positive or not, which also came up as a myriad of poignant development as the journey continues.

As for the side characters, what else can I give but praise for the balanced amount of entertainment and heartfelt value that they have to offer?

Moreover, at some point of the ride, there would come two characters who absolutely stole the spotlight away from Vivy (E4), and to me, that has been one of the most spectacular thematic showdowns I've had in a while.

Coming from studio Wit, it's no surprise that Vivy Fluorite will shower the audience with sublime aesthetics to kick it up a notch. In other words, eye-candy animation, first-rate choreographed action sequences, and exquisite still-frame are common occurrences in this anime.

What's more, the components are all well thought out with careful planning to make the most out of the story and character.

To name a few, magnificent closed-up shots emphasizing character expression, gestures are taken great care to bring out subtle interactions. The eye expression, however, is undoubtedly the best element in this regard.

That said, to me, it is the astounding display of directing that pretty much interlinked all of the critical segments.

I mean, Vivy Fluorite has some seriously insanely mesmerizing color palette and lighting that all blend in together to formulate a matching atmosphere and content delivery.

The transition is nothing but visual treats, featuring a clear formating of 21:9 for flashback or premonition, then fluidly switch back to 16:9 for the presence. In other words, good ol' "show not tell" technique.

Occasionally, symbolism is added to further enhance the overall picture of the series.

Not to mention the elegant venue design and landscape shot that radiates nothing but Blade Runner energy (apologies for repeating myself, but I'm still hype for that).

Regardless, at certain points of the show, inconsistencies in quality would arise. For example, clunky flow and transitions or inappropriate choice of tone in the context of certain arcs, thus provoking more contrast than usual and somewhat dampening the experience.

When it comes to anime, sound is usually the least fascinating factor to many people. However, just this one time, I'm forced to revalidate that mindset.

The supreme sound system of Vivy Fluorite is easily the single best thing that it has at its disposal. From the OP, ED, insert tracks, hype battle music, to even ambient background sound (BLADE RUN... ok I'll stop), Vivy Fluorite wholeheartedly poured out the best of the best of its capability to create such a delicate sound system.

For once, as standalone instances, they are great tracks. But for this anime, it's not just about composing a nice piece of music or possessing dedicated singers, but more so about giving them a goal, just so they can shine very brightly on the "stage" without being treated as mere decors.

To put it bluntly, depending on the "version" of a track or the context of the story, you will have a complete change of perspective or how a song is received.

Not only that, I'd even go as far as saying when putting 2 different songs side by side (the 2 OP), you get a complete picture of a particular character, how her conflict is portrayed in a very roundabout yet effective way.

To go beyond that, the "sound" element doesn't stop at having a concise aim and purpose in the story. It even "invades" the meta by having a clear structure to squeeze out the absolute most of its potential and value, which is an excellent decision from the production team.

Not only does it break the cycle of "adding music just for the sake of adding music", but it also delivers a rarely seen side of anime, which is to use sound as a reliable foundation for almost everything else in the series (well, it's still an idol show in the end so lel).

On a different note, while being a heavily music-centric anime, Vivy Fluorite gets its priority straight.

Sound is sound. It's only a means to an end, which is why it's crucial knowing how to use them rather than cranking them up without any plan nor consideration for the context of the story.

For example, the volume is toned down at battle scenes, just so they won't overshadow the actual content that's running on the screen.

Or given the circumstance of an event, sound distortion was also put into good use to captivate the tragedy or bitterness of the grand scheme of things.

Timing is also of paramount importance, especially when the flow of the event needs to be coherent.

To wrap this up, Vivy Fluorite's Eye Song truly deserves the hype it has been gathering IMO.

The fact that it is an original anime (despite being influenced by other works), has a daring approach in its storytelling/execution, on top of being backed by an arsenal of remarkable assets like top tier animation and sound design just prove that anime as a medium has so many possibilities that could individually morph into something phenomenal their own.

Even if this series is flawed and might not have a fitting story for some, the insanely high production value should be able to guarantee a fun and entertaining experience at the very least.

If anything, though, at last, I have found an entity capable of denouncing the notion that "anime is dead," which is very easy to encounter as of late