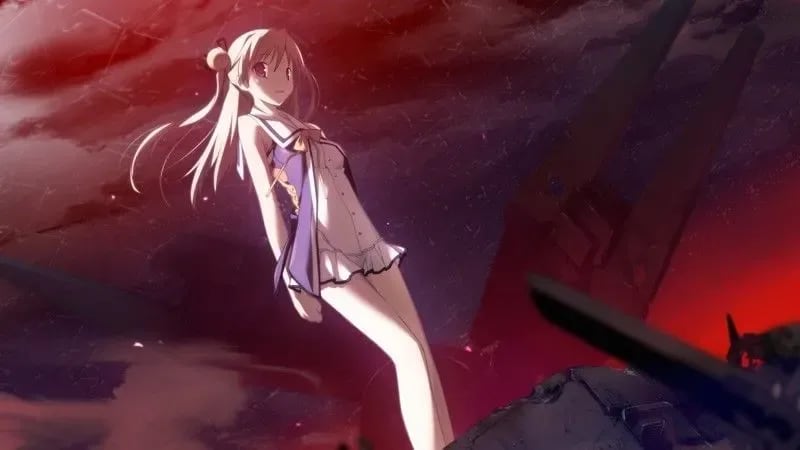 Finished the game today. Honestly speaking, I’m not sure how to put this. It almost had it, you know, like I’m very close to the edge and all it takes is one little push and I might have found myself being drowned in a sea of jksdfhsdjfhsdfjsd feeling. But welp, I guess this is one of the problems with being overhyped over something.

Now, I’m not saying that this VN sucks or anything, it’s great in fact, definitely my top 5 for now. I also feel like this is not even the creator’s fault as they did an excellent job presenting this work with incredible production value.

Sure, the overall concept and theme might not be groundbreaking or revolutionary but the dedication is there and very real, sometimes that’s all it takes for me to appreciate work.

However, that's just it. The game had reached its peak at some points close to the extreme endgame period, I stopped getting chills and goosebumps from all of the supposed “wowwaaahhhh” moments.

But hey, beggars can’t be choosers. I enjoyed this VN a fucking hell lot regardless.

But to get back on track, the best part about this VN is no doubt its ambitious world-building and plot integrity. For real, I never realized how fun it was to take out a paper and outline the “big picture” after reading certain parts of the story.

Though they would all be explained later on, I just find taking the initiative by conducting an educative guess a very whimsical experience, and BSD is the first work that made me do so, so well done here.

The routing structure is very cleverly done by the creator to make them actually have a purpose rather than being there just for the sake of being there. Although BSD is not the first VN that I’ve read to follow this method, I find its approach engaging and very meticulously put, so that’s a big bonus.

On a different note, while some people have claimed that the other routes more or less serve as fillers, I’d like to strongly disagree because they both solve mysteries and raise some questions at the same time, thus giving the necessary fuel to continue on with the overall story.

Not to mention some of them even carry various underlying themes regarding the cyberpunk setting or just simply the meaning of being “alive”, which can get very thought-provoking and poignant (Chinatsu route is best in this regard don’t @ me).

That being said, plot convenience can be a drawback in some segments, albeit not too big of a deal compared to the grand scheme of things. But man, the recurring raep pattern is just downright annoying and :schleep: lmao.

Other than that, the pacing is most likely the biggest obstacle to those who have low tolerance on SoL, though I myself was rather irritated by the “switching” back and forth between flashback and presence.

The cast, in general, is nicely put, I guess. I mean apart from, according to Rain, “A scumbag lowlife piece of unrecyclable trash” Gilbert, and Anan (who’s pretty much fodder anyway) I don’t think I hate anyone or at least find them repulsive.

At the same time, I have failed to find anyone that is capable of creating a profound impact on me, which is quite a shame given the great potentials of this VN as a whole.

Kou is one of a few VN protagonists that I actually enjoy, can be dense when it comes to dealing with girls, but when situations demand he’s more capable than he looks.

The side cast is pretty solid, Fenrir gang is one thing but holy shiet Seira is an absolute troll (and motherly figure) and I like it. Would be nice to know more about them though but at least they’re not entirely shallow, unlike most stories.

And now for the waifu war heroines discussion, honestly, I just can’t decide between Chinatsu and Sora. At least I think I can safely say, for the first time ever too, that there’s no best girl to me in this VN.

At the beginning, I actually favored Chinatsu a bit but only as a character because she has so many great themes that are my favorite combined with the fucking amazing bad ending (Departure) on top of a pretty non-forced romance progression (If we also count pre Gray Christmas).

But then as I got closer to the endgame, Sora started to grow on me more, and frankly, while I personally find her to be just a bit above average as gf material (mostly regarding personalities), her story and the plot that revolves around her is just aaaaaaAAAAA. So damn, I felt like I hit a wall.

I mean, both girls have their pros and cons, while most people would prefer Sora and even despite Chinatsu for sure because of what happened in her route (I already wrote an essay defending her), but to me, context matters, and I’ve come to a conclusion that both are fit to be Kou’s gf, so yeah, I can’t pick who’s the best girl. If anything though, their rivalry can be intriguing, given how it can randomly switch between ridiculous to hilarious and even comfy to witness.

Rain is a bit below these 2 to me. She’s loyal and the best support we can ever ask for but that’s about it. I feel like there’re more potentials to her character rather than just merely clinging to Kou but whatever.

The rest of the heroine cast is fine at most, though it seems there’s a lot of hate on Nanoha which is understandable but I thought it made sense how she was meant that way so I don’t really mind her behavior tbh.

Aki and Makoto are in a realm where, urgh, I’d rather not touch but as characters they’re fine. Yet again, the chemistry/rivalry between the heroines, in general, is not entirely flat and can lighten up the mood in many ways, which is also a good thing.

Gameplay-wise, man, the RPG sure as hell needs some serious renovating. I mean the fighting mechanism is not bad, but do they have to cram a ton of random battles in between a section of an important conversation or some sort? I lost count of how many times I wanna hit the keyboard because of the interruption lmao.

Anyhow, it would be nice if we can have a free mode to select other characters’ Simulacrums but not a big deal.

Technical-wise, the CGs are neat with some extremely dope shots to either highlight the climax, dramatic values or simply for aesthetic purpose.

That said, the character design can be invested more tbh because their outfits can be very terrible (Chinatsu why lmao), but at least Sora got a sick one in the endgame (gotta love the lighting in this shot boi).

Sound and music are a treat. I mean whenever the 2 OPs play during a fight scene I just simply lost my shit. The BGM on the other hand just hit right at the feel, “Rainy Comfort” is probably my fav in this regard.

Apart from that they also got some great combat themes too, the one for the cultist Dominion unexpectedly got me fired up the most other than the 2 OPs.

If there’s anything to complain about, yep, the menu still sucks. They should have picked a less distracting design, color scheme, and positioning instead of cramming up everything in a single tab together but meh whatever, at least there are fun features like the profile chart that can be fun to goof around.

Overall, I think Baldr Sky was a wonderful ride for me. Though it is not the best thing I’ve seen, it sure as hell got me deeply invested at some points, and actually provided a solid gameplay experience despite the flaws mentioned above (because hey drawing is fun).

And as usual, I’d throw in a character tier list because why not: