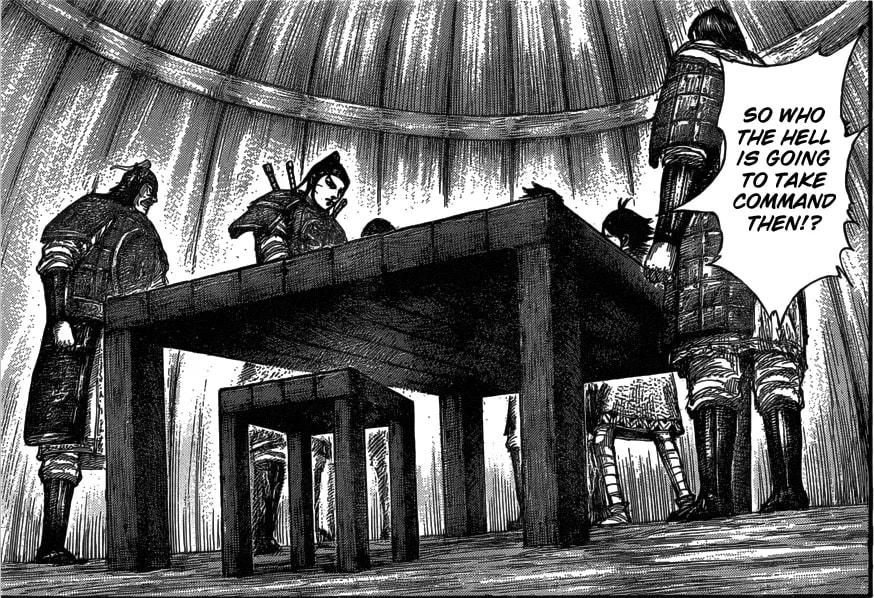 Hara is just teasing us with this korean level drama in this chapter. First of all, as Kanjou said, it’s just a rumor, unless Hara shows me what exactly is on Ousen’s mind, I won’t give too much thought to what Kanjou said at the end of the chapter.

That aside, this chapter just makes me grow to like AKou even more than what he has done so far. The man taught his bois to never waver even in his absence and I also take it that the fact he managed to hold off against not 1 but 2 martial beasts at the same time on the 9th day has somewhat inspired his men to fight even harder.

Furthermore, this small panel seems to hold a lot of meaning to me, instead of showing AKou’s subordinate’s face, Hara used the empty chair which belongs to AKou.

Maybe I’m just overanalyzing stuff but to me, it’s proven that Hara has stepped up his game in terms of panel and object placement. It’s not just about how nice and detail you can draw anymore, it’s also about how to deliver the message in those panels.

On a different note, one of the best moments in this chapter is during the strategy meeting, when Ten asked "So who the hell is going to take command then", the angle was focused on neither Shin nor Ouhon but rather on the empty seat of AKou (again), who has been the commander of the right-wing so far.

Why is that? Isn’t it obvious that Shin and Ouhon are far more important than AKou, at least from the readers’ perspective?

To have someone taking charge of an entire wing is quite a heavy burden to carry, in the case that he is to be taken out, it’d create a great shock and disorder, thus resulting in the complete collapse of the entire army.

So that’s how it is, Ousen cannot risk giving Ouhon the wing command, especially after what happened to AKou on the 9th day, as he was ganged up by 2 monsters from Zhao side, which was without a doubt RBK the mastermind’s intention.

So to sum it up, the responsibility of being the commander of a large army (or just being general) isn’t as simple as just giving some order and coming up with some fancy tactical maneuvers. It’s also about duty, burden, and a “weight” so heavy that one must carry it at all cost, lest a calamity descends upon one’s army.

As of now, in terms of capability as a strategist or fighter, Ouhon is without a doubt the perfect candidate for the right-wing. However, it’s still too early for him to carry such a heavy “weight”, he still needs to learn more and evolve more to be fully prepared for it.

And this, fellow Kingdom fans, is how Ousen displays his concern for his son, in a super duper subtle way. People can keep rambling as much as they want about that “he’s not my son” crap, the fact remains unchanged is that Ousen isn’t a horrible father, especially given the way he treated Ouhon in that flashback of Wei Fire Dragon arc.

If Ouhon weren’t his son, Ousen would have never given him the honor of bearing the “Ou” in his name. This is just his way of doing things, I’m expecting lots of major developments in the next few chapters, and Ousen will definitely take the spotlight (of course Shin, Ouhon will also have their shares).