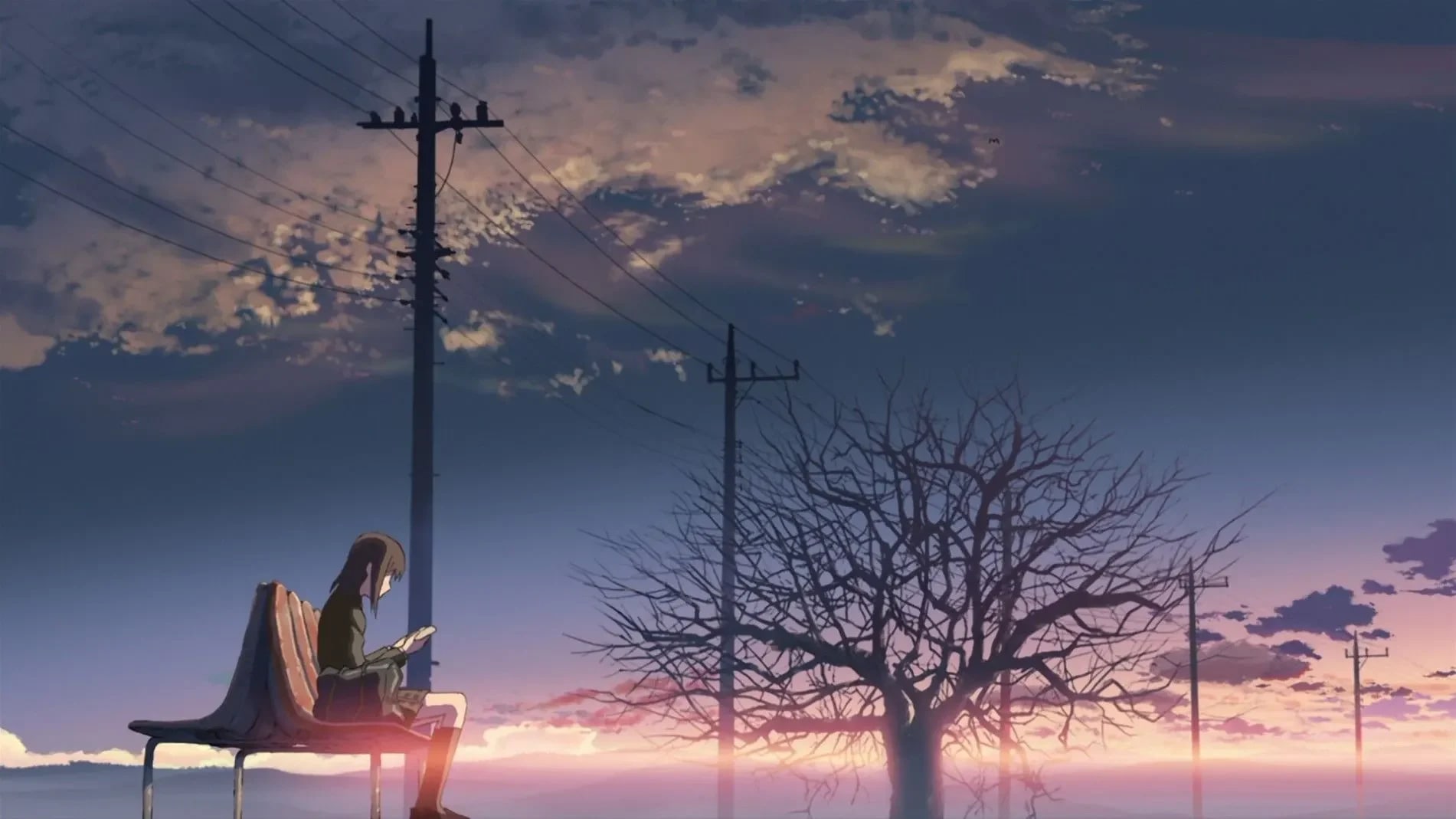 It’s been like 3 years since I got to know of Makoto Shinkai through his most iconic work: 5cm/s, and damn, looking back I sure have come a long way. I gotta admit though, Shinkai is really a magician of emotion, capable of playing with the audience’s mind through visual tricks and his surreal romanticism.

But anyway that isn’t really the topic this time. When I completed 5cm/s for the first time, I told myself that I’d never revisit this anime, not because it’s too sad but for fear of being incapable of “feeling” it again.

Some stories are meant to “hit” you just once, since the moment you learned of the twist or outcome unless you brainwashed yourself out of that part, you can never get that powerful sense of emotion rushing into your mind again. However, 5cm/s has probably proven me wrong in this regard.

The 3 years timespan might seem huge but I’ll be honest, I had barely forgotten any major turning point of the anime, they were still as clear as daylight, yet I could not help but emerge myself in that similar rollercoaster trip as I did back then when rewatching 5cm/s.

The story started off with a pretty standard premise, 2 childhood friends going through some hardship (but not really, it’s pretty cute when I look at a slightly different angle in fact), and slowly but surely developed an intimate relationship as time flew. However, what really sets up the mood and impact is the “atmosphere”.

Immediately upon the introduction, we’d be hit with a lot of symbolism and not-so-subtle foreshadowing of what to come in the late game. Frankly, even if you’re a heartless person that gives no crap to romance and the likes, I’m sure you’d still be impressed or at least entertained by such a powerful opening sequence of the anime.

No matter how I look at it, the way the first 2 main characters were presented gave hint to a big “NOPE” regardless of how hard they struggled through their predicament (I mean, the way Akari casually went ahead and left Takaki behind, the interrupting train, heck even the title itself is already a major spoiler), thus making the anime the more “tragic” in its own way.

One common trend that mostly all Shinkai’s works share is “distance” between individuals. Not always taken literally, it can also entail figurative meaning behind all those interactions, conveyed through the characters’ emotion, thoughts, or just a simple stare. To me, this is probably Shinkai’s strongest asset among his skillset, and 5cm/s is definitely the prime example of this theme.

In my opinion, 5cm/s peaked in the first chapter, absolutely no bias involved (no I really meant it). I mean, the dialogue, the inner-thought, the interaction, the visual effect and sound (basically tons of moments felt very real, like the sound of heavy snow being stepped on, or a train arriving under the most desperate situation), all of them were woven so masterfully together in order to “paint” the full “picture” that Shinkai envisioned in his mind, that’s just something.

Even if I disregard plot, that climax under the tree was so spot on, my long lost sense of empathy finally rose again to fully embrace that majestic yet tragic moment of the anime (for real, the way the 2 of them were “separated” felt very forced and fuck no they should have been together for all fucking time, k I’m done salting).

The farewell was also really well handled. I mean I’ve been kinda in a similar situation before so it hit me the more here but damn, that regretful look from Akari really got me there, again, absolutely unbiased opinion that Akari is objectively the best girl of the whole story (I really, really mean it this time).

Like cmon, I’d kill to have a girl waiting for me for more than 4 fucking hours under a fucking blizzard with nothing to entertain or kill time whatsoever, it was just fucking raw waiting, like damn, when the 2 of them got to finally meet after that long interruption it legit gave me goosebumps.

In all seriousness I’m really proud of Akari, like whew, small and fragile but not without such steadfastness, you sure can melt the heart of the most stone-cold out there, way to go my girl.

While the 2nd chapter feels not as strong as the first one, it did give me some food for thought as well as a bit of chill thanks to the superb scenery and setting. I mean I always dream of living a casual life in a noise-less, tranquil, and not-so-densely populated place, mostly to get peace of mind and run away from all the burden and trouble in my life.

Anyway again, “distance” was also focused on in this chapter, albeit not literally. The 2 main characters are always seen together, yet they’re so “far away”. The boy, Takaki, could still hardly rid himself of the past, constantly deluding of a paradise land with his loved one (gosh this is a bit indescribable but why it’s so filled with a sense of fucking “regret”).

On the other hand, the girl, Sumida can never get to convey her feeling to her crush despite having gained herself proper motivation and perhaps excuse. What really hit home here is the fact that Takaki never saw Sumida as anything “close” to him, other than a friend or maybe sister lmao.

Some say Takaki indirectly caused a detrimental blow to Sumida and while I don’t have anything against that, it’s just inevitable. It’s not like he really meant it that way, just that the “past” resides too deeply inside him so RIP, don’t blame the guy.

In any case, the little twist with ghost message gave me a bit of chill, like I kinda understand that sort of obsession but BOI, YOU CAN ACT LIKE A MAN.

The highlight of this chapter is probably when the 2 characters gazed into a launching NASDA rocket and they each came to their own answer, thus born another “tragic” romantic outcome.

All things must come to an end, and the final chapter is simply a fitting conclusion to this gloomy romantic tale. Just as I thought it could not get any more depressing, Shinkai be like “psst, what about a bit more but from both sides”.

Like wow, not only did Takaki lead a slightly fucked and aimless life (RIP the 3rd girl), Akari gotta add the final nail to the coffin with that dramatic revelation about her “path”.

Yeah, I know it doesn’t change much, it was clear from the get-go that these 2 would never be together, but cmonbruh, do you have to be that savage, it feels like getting hit by an earthquake and then tsunami in quick succession as your house’s right next to the sea lmao.

That being said, I think the final cut kind of give off a small ray of hope in Takaki’s future, as he didn’t appear bitter but instead showed a sense of relief and finally got the strength to move on.

The same can also be applied to Akari but I wish we literally had a narrative of her side as she had so much potential (ahem, absolutely not bia… ok I’m stopping now).

Phew, it’s been quite a while since I’ve rambled on this much. The truth is that, during my rewatching 5cm/s, though I had tried to suppress it, the nostalgia of my own glorious past just kept submerging in my mind.

It’s not like I’m still attached to any of that but yeah it just is like that, made me end up thinking about pointless stuff in the good ol’ days.

Anyhow, I’ve always held some doubts about my opinion on Shinkai’s works but this little trip down the memory lane (both literally and figuratively) pretty much solidified my appreciation of this whimsical director.