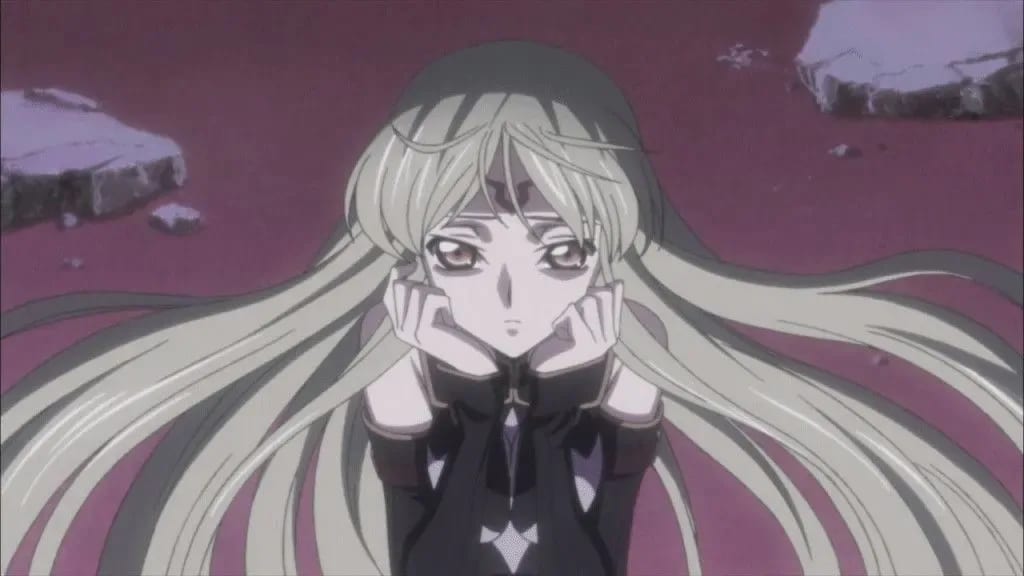 Much as I found love theme to be cheesy and shouldn’t be included in a massive scale anime like CG, I think the writer did a not bad job at portraying and applying it into the cast. The relationship between Ougi and Villeta is probably one of the highlights of this anime given the worldbuilding of CG. They’re from different country, culture and even skin color, yet they’re deeply attached to each other, though it’s all thanks to the convenient amnesia thingy, the way things laid out between them is just something, kind poetic when I think about it, once enemies, now lovers, ignore all the prejudice and hatred in the past and come to terms with reality, not bad.

Next up is C.C, wow her wish sure sounds a bit lame and pretentious at first but when her past was revealed I had to reevaluate everything about her. She’s been a long journey, like a hundred years at least and in time forget about lots of things such as emotion, true feelings, kindness, etc. However, as she met Mao and then LL her heart started to open again, but she still has doubts, she cannot risk letting her heart torn apart again like what her predecessor did to her, so she had to keep a distance, or to be more precise, draw a clear line between herself and the contractors.

Throughout the journey between LL and CC, we’ve seen that these 2 continuously supporting and “bitting” each other, LL doesn’t feel comfortable about CC keeping secrets while CC is constantly worried about her goal being jeopardized, yet they never stop backing each other up, entrusting each other to a major degree, etc. Yeah CC is selfish, but think about it her wish really has little impact on LL’s plan as a whole, in fact, it even does him more good than bad since he wouldn’t have to babysit her anymore, less burden to carry eh. CC is aware of it, which is also why she refused to let him know until the very climax of this episode because it wouldn’t make any difference.

However, LL showed that he doesn’t simply treat everyone as chesspiece, he does care about his subs to an extent like Kallen, in fact, he wants to understand about those close to him (again Kallen as an example), hence it explains why LL is kind pissed that CC keeps so many secrets to herself despite them being through so many life and death scenarios. So I guess CC does realize this as well which is why she felt hesitated to leave LL in this episode, she has grown too attached to him, it’s not about being accomplice anymore, they’re officially “friend?” now, a genuine relationship (wait I think I’ve heard about this concept elsewhere in the modern era hmm).

It’s quite funny isn’t it, for more than 40 episodes (SS1 included) CG has always been about war, racism, discrimination, or in short, all those negative themes about how harsh life is, then suddenly, “love” popped up out of nowhere and shone bright like a diamond all thanks to C.C. It proves one thing that relationship between human is something should never be taken for granted, whether it be for the sake of your career or scheme, if you understand people then you’ll gain more positive result than just treating them as mere tool, as reflected by CC and LL.

TLDR: CC just wanna obtain “true love”, dying is just an excuse since she only pretends to give up on the surface but deep inside she desires it and hope a miracle will happen more than anything, which is why she constantly supported LL and never betrayed him, she was hoping that LL would be different and it really paid off.

Cheesy as it may sound, CG sure did a fine job at polishing those themes in a very action-packed manner. Nice job Sunrise.