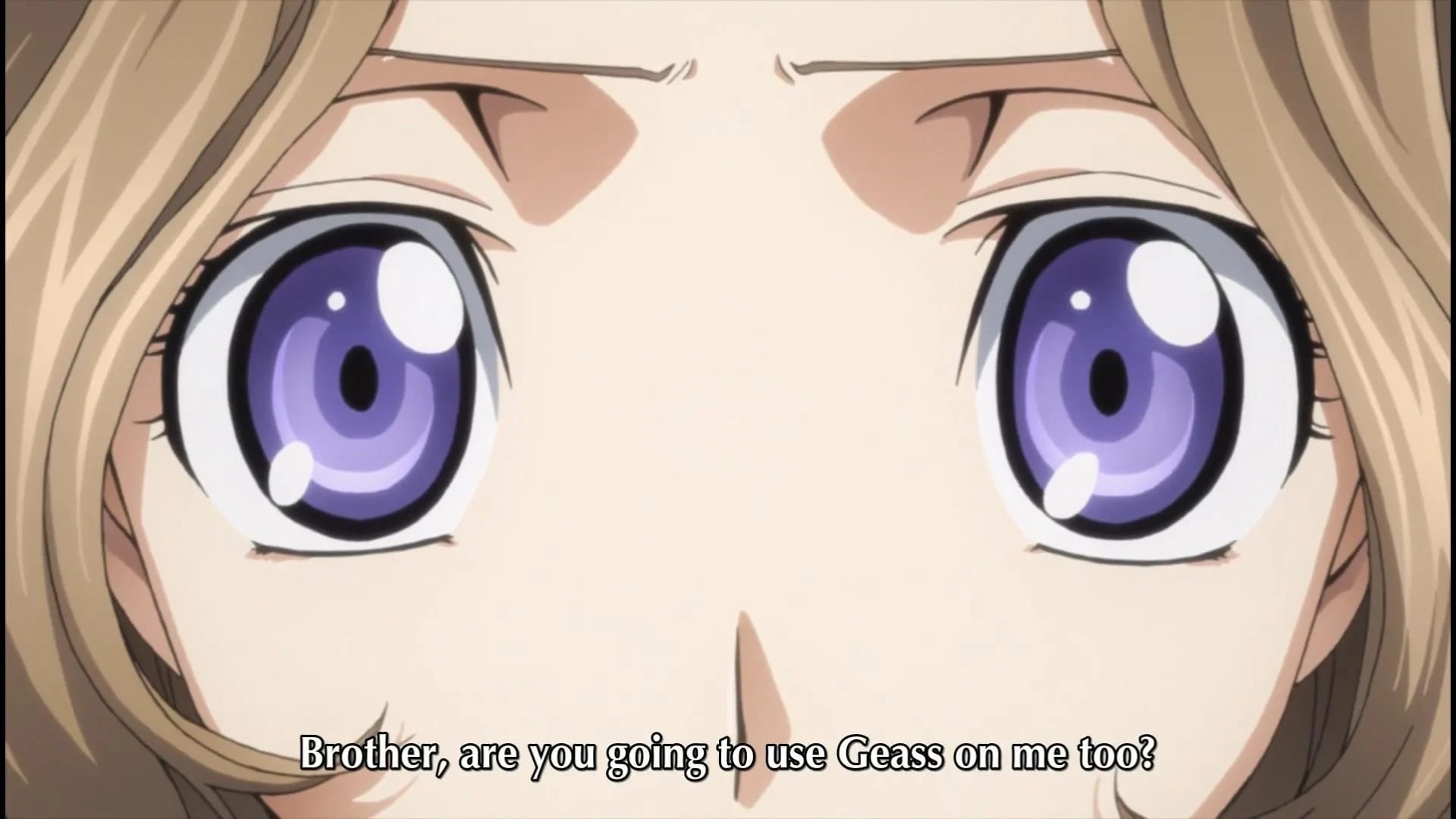 Too many plot convenience and inconsistencies, it feels like the 2nd half of this season were written in a very rushed manner, the writers disregard lots of detail as well as the nature of characters established in SS1. However, entertainment-wise, it’s not something I can get every day or month, even year.

Time to dig a little bit deeper into the characters, while some people may find Nunnally to be annoying/dumb let’s not forget that she’s very young and lacks the capability to comprehend all those complicated shit like politics, not to mention that it was also thanks to Schnizel’s sweet words that Nunnally got influenced and decided to stand up against her brother. Schnizel is a dick for manipulating people with that carefree/cheerful face of his, he’s no different from Charles, pretending to be good to people but in actuality, he just wanna exploit then toss them away like trash, I’m glad he got rekt by LL despite the stupid plot convenience.

Apart from that, Nunnally just wanna share her burden with LL, since she understands LL has been through a lot for her and she felt guilty about it and just wanna do something to make amend. When you look at it as a bigger picture, it’s a splendid sight of 2 siblings “competing” against each other to see who score the bigger one (hatred) just so the other won’t get hurt, fight to heal (kinda like, “You’ve done enough bro, hold my beer and lemme show ya I’m not worthless”). Anyway, LL’s plan is probably on a way way bigger scale than that of Nunnally, so I think he wouldn’t stop at just mere words from Nunnally. That said, her resolve to break the Geass sure is something, the only person who’ve ever succeeded in that regard is Euphie.

On a different note, it would appear that C.C and LL have officially accepted each other at long last. Now that they have nothing to hide, it wouldn’t be too far-fetched to say CC is the only person who can stay by LL since she understands his power the most and can’t be affected by it. The fact that LL was worried about CC simply nailed the relationship between them, he doesn’t treat her as a useful “hand” for his scheme anymore, nor did CC think of LL as a tool for accomplishing her goal, they were there at the battlefield on their own will, which is quite poetic given the fact that they could remain that calm and had time for such casual chatting in a very dying situation.

C.C’s fight with Kallen was relatively short, but it’s interesting to know that she actually cared about winning/losing, which implies that her icy armor has been shattered all thanks to LL. It might also be a hint of jealousy since Kallen was also LL’s favorite, CC felt like she was pushed aside back when the 3 were still at the OBK, so the duel at this episode gave off a “settlement between LL’s ladies” vibe to me lmao.