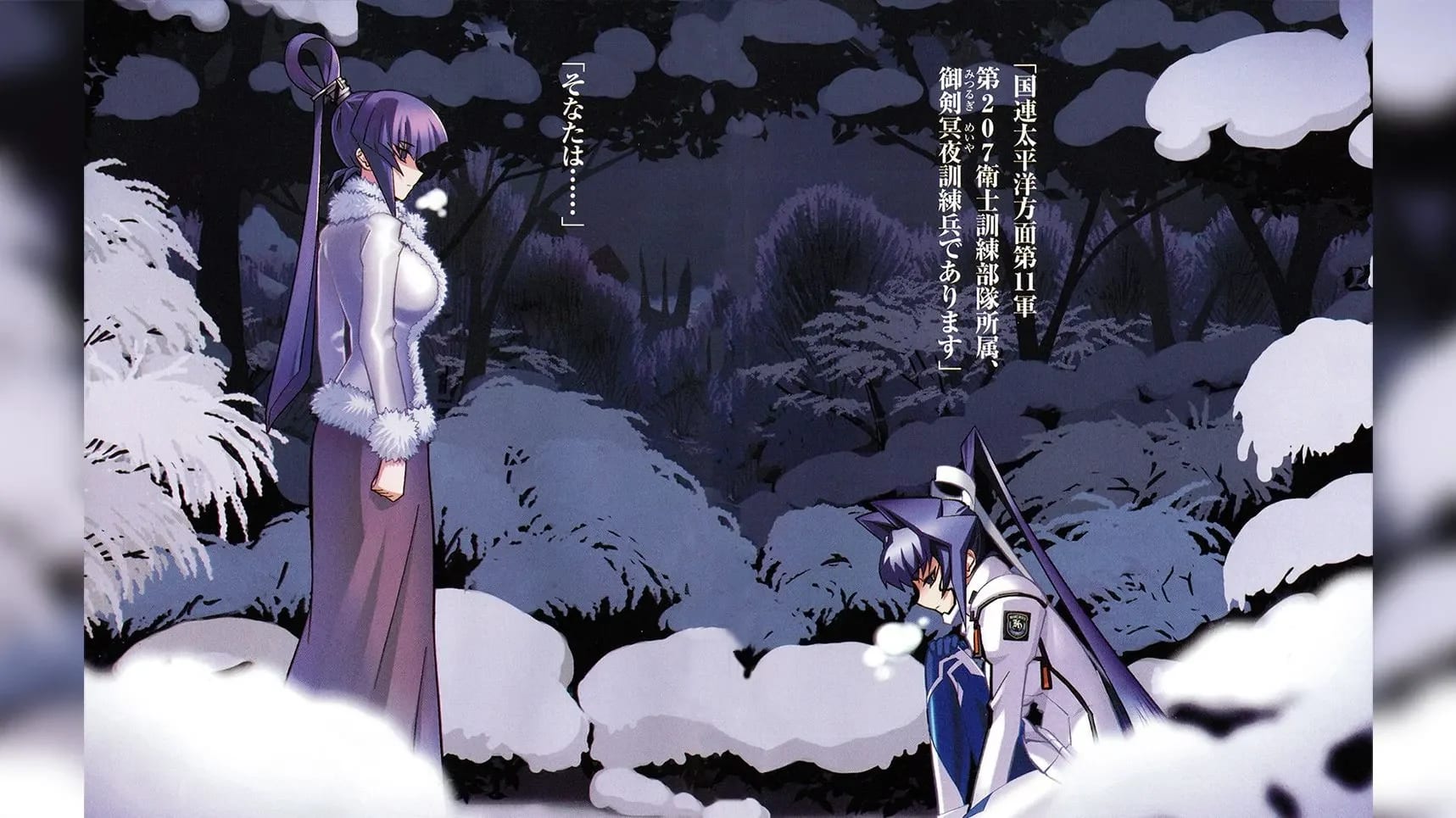 It is pretty funny to think that my expectation was near zero when I first delved into Muv-Luv.

All I knew beforehand was that this thing was sitting at the top of vndb, and that's it.

What I did were a few mundane things. To be more specific, I went on the Internet, dug up some links, downloaded, and fired this thing up (oof, a blatant admission of guilt, but I did buy the Steam version later on, I swear).

I had even planned to play this game 100% blind, in fact (looking back, I really should have, feck it), but time wasn't on my side, so welp.

All said and done. Before I caught my sense of it, I had already found myself being overwhelmed by so many HRRRRNNNNNGGG moments of this VN.

While the ridiculously high production value of this VN was partially the culprit, there was one particular existence that refused to let me take my eyes off her.

I mean, yeah, to some people, she's a pretty standard heroine with good ol' trope and a bit of fleshing out in the horrendous setting of BETA-verse to make herself stand out a little bit more than the norm.

However, to me, she is that one guiding light that enlightened me in lots of  fucking amazing ways that I never thought I had needed.

Her name is Mitsurugi Meiya, born a daughter of a powerful noble house, lived as a disposable political tool, and died a free person.

What really defines Meiya's character is that, despite all the injustice inflicted upon her, she still held her head high and embraced all of that as if they were trivial matters.

Such is the embodiment of duty, a rare trait to find in anything related to 2D culture.

Her theme is the difference between living and being kept alive, which doubtlessly stands out from almost anything else that could be offered in this franchise, IMO.

Though she never displayed any sign of contempt against the way things were, the tears she shed upon receiving the doll is her genuine feeling regarding the separation.

No matter how one looks at it, Meiya was but a teenage girl.

She is not a robot who will blindly follow orders, nor a soulless being who would grind her teeth and suffer in silence.

She most likely had things that she wanted to accomplish as a normal girl, like hanging out with friends, touring the big world, or maybe doing something as simple as having a good time with a sister (*sob*).

Admittedly, to see Meiya filled with regret like that, I too could all but be drowned in my own lamentations. Almost no word was ushered during that moment, but her expression alone is enough to tell the whole picture.

When her rights had been dictated by others, what else could she do to make her life counted as "truly living"?

Love could be one answer.

Unfortunately, fate had once again turned its back on Meiya.

Regardless of what she did to Takeru, like how she always stayed by his side, supported him, lifted him up, and even willingly gave away her pride as a woman to get him back on track, her feelings had never reached Takeru, for whatever reason it was.

It could be that Sumika's influence on Takeru is too astronomical. Or Takeru was basically that dense to realize, because hey, if it took more than a decade before Sumika finally got close to Takeru, then two months would have probably been hopeless for Meiya from the start.

Yet again, what did she do after being sidetracked like that? Of course, her head still held high, and her pride stood still as if it would only wither when the Earth did so.

What's more, not once did she even think about using shortcuts to get to Takeru, nor did she ever resort to underhanded tricks in the competition against Sumika.

Given how Meiya was portrayed, she most likely wished to win over Takeru straightforwardly and not rely on anything deemed as "convenient."

And just like that, everything she did, she did it fair and square, in that "battle" as it had been in life.

When a golden opportunity presented right in front of her eye, she tossed it away and aided in mending the bond between Takeru and Sumika instead.

It would not be a stretch to call Meiya a fool in that pivotal event.

From my viewpoint, when it comes to love competition, there's no such thing as unfair advantages.

Suppose that she had used that opening to gain Takeru's affection, nobody could have ever complained, or at least they could understand.

Nevertheless, this is when Meiya truly shone as a tragic heroine.

Logically speaking, it would not have been a wrong decision of hers to advance towards Takeru.

But Meiya is no ordinary girl.

She was molded in a strict environment (Mana hype) and greatly influenced by the Bushido way.

Naturally, Meiya would never allow herself to commit such dishonorable deeds, even if it came at the price of having herself mentally devastated, which had also been foreshadowed earlier.

As the hour was upon her, Meiya had to withstand yet another detrimental blow to her resolve, which was to witness the man she loves flirting with her mortal love rival.

With her reaction being vivid this time, Meiya's heart was certainly shattered.

It would be a lie to say I was not in denial for a long time, close to 100 hours of reading this story, in fact.

Needless to say, I had no other option but to open my eyes and face the reality that Meiya never had a chance in this endeavor.

Not since Alternative, nor Unlimited, but right in Extra. Do note that I don't hate Sumika for any of that. She's all good, though I used to hate her 'cause of other reasons XD.

Anyhow, my point being, things had been set in stone from the very first stage of the story. The role of the girl known as Mitsurugi Meiya would always be to remain a shadow, left in the dark, unwanted, unnecessary.

And YET AGAIN, she did not faze.

If anything, her face burned clear, even at the gate of hell. Without a single shred of hesitation or regret, she asked the man she loves to pull the trigger and send her to her grave.

There is no mistake that Meiya was indeed "living" her own life in that short-lived Sakura operation, no longer bound by any of the injustice she had been through before that.

Yes, it was, surprisingly, Kouubin Yuuhi, not as the Shogun, but as Meiya's flesh and blood.

Personally, I find this scene to be the most poignant sight to behold in the entirety of the trilogy.

It neither felt forced nor came out of the blue, given how the sisters had been through during the Coup D'etat (in a subtle way).

Looking back at Meiya's journey again, as she got rejected by her old family, rejected by the government, and rejected by the man who stole her heart away, who could she possibly turn to in such a desperate situation?

Somehow my mind pictures a scene of a young and crying Meiya running towards Yuuhi when she was in trouble. That is what sisters are for, aren't they?

IMO, everything about Meiya was handled with nuances. From how messed up her life was to her pain of falling in love and her reason for "being alive."

Lastly, since her character was designed to be one who seeks no reward in her deeds, the name Mitsurugi Meiya serves as a shining beacon for those who face destiny head-on regardless of how cruel it is.

On a different note, I can agree that Meiya's character is undoubtedly far too good to be true. It's ridiculous even.

The way she went out of her way to resist temptations and retain her moral code even at the darkest hours cannot be, in all honesty, deemed as practical. I'd say she's more of a living ideal than a human being.

Nonetheless, Muv-Luv is a work of fiction; therefore, I don't think it matters whether if she is unrealistic as a character or not.

And you can never tell, should humanity face a similar crisis in the far future, what guarantees that there won't exist such noble souls as Meiya?

None of that is of relevancy because, from how I see it, Meiya just fits in the setting of Muv-Luv.

She's there to remind me that there are many things out there that I should try and stop taking for granted. I really owe her a great deal to that.

AAhhhhh, when I first made the draft for this long-ass rambling post, it was 2 am, on the rooftop of my house. I kept asking myself why and how in the actual f*** did I have to torment myself like this.

But what do you know, such is the power of the 2D world.

I've been through plenty of traumatic works. Still, Muv-Luv has got to be the one that hit me where it hurts the most. And I shall have Meiya to thanks for that.

It was such a phenomenal experience to have you accompany me on a long and uncompromising journey.

P/S: and NO, Meiya is not my waifu since that role is reserved for Mana and Mana alone. Meiya is more a precious one to me, kind of like that Noble Confidant bs (f*** I mean thank you Kouki), sooooooooo welp.